The semiconductor industry is the cornerstone of the modern information society and a strategic, fundamental and leading industry that supports current economic and social development and safeguards national security. As an important part of the semiconductor industry, the third generation of semiconductors has important strategic significance for the national economy, national defense, international competition, social and people's livelihood, and is one of the focuses of science and technology competition in the world。

At the technical level, SiC substrate and epitaxy are still mainly 4 inches in China, and 6-inch products have been developed and supplied in small quantities; domestically produced GaN substrates are still dominated by 2 inches. Domestic 600 ~ 3300V SiC Schottky diode technology is relatively mature, industrialization continues to improve, and 1200 ~ 1700V SiC gold oxide half field effect transistor (MOSFET) devices have been developed, but the reliability is low, currently in small batch production Stage; domestic full SiC power module, the main indicators are 1200V / 50 ~ 600A, 650V / 900A. In terms of GaN high electron mobility transistor (HEMT), GaN transistor products of 650V/10 to 30A were introduced in China in 2018; GaN microwave RF amplifiers have been successfully applied to base stations, Sub 6 GHz and millimeter wave GaN RF in GaN microwave RF devices. Power amplifiers have also been mass-produced。

In terms of industry, under the circumstance that semiconductor foreign investment is blocked, domestic independent innovation and development is the only way. In 2018, with the dual support of policies and funds, three new SiC production lines were added to the third-generation semiconductor industry in China. In terms of investment, GaN is hotter. According to the third-generation Semiconductor Industry Technology Innovation Strategic Alliance (CASA), there are incomplete statistics. In 2018, there are 8 large investment expansion projects in the third generation of semiconductor-related fields in China, of which 4 are related to GaN materials. The amount involved is 22 billion yuan. In addition, compared with the international corporate mergers and acquisitions boom, there are only 2 domestic 2018。

In the production mode, the mainland has formed a complete industrial chain system from the substrate to the module in the third generation of semiconductor power electronic devices. The device manufacturing is dominated by the IDM model, and the division of labor is being formed in the “design-manufacturing-sealing and testing” division. The system; the mainland production line is still under construction, and has not yet formed stable mass production. In terms of market, according to CASA statistics, the size of SiC and GaN power electronic devices in the domestic market in 2018 is about 2.8 billion yuan, a year-on-year increase of 56%. It is expected that the compound growth rate will be 38% in the next five years. The market size of Ga N microwave RF application is about 2.449 billion yuan, and the compound growth rate is expected to reach 60% in the next 5 years。

Regionally, the development of China's third-generation semiconductor industry has initially formed five key development areas of Beijing-Tianjin-Hebei, Yangtze River Delta, Pearl River Delta, Handan Triangle and Mid-west. Among them, the Yangtze River Delta agglomeration effect is prominent, accounting for the second half of 2015 to 2018. 64% of the total investment at the end of the year. In addition, representative cities such as Beijing, Shenzhen, Xiamen, Quanzhou and Suzhou are stepping up their deployment, taking multiple measures and promoting them in an orderly manner。

In general, China's third-generation semiconductor technology and industry have made good progress, but there is still a certain gap between the material index and device performance and the foreign advanced level. The market continues to be occupied by international giants, and the demand for localization is urgent。

Frequent domestic policies at all levels, aimed at achieving self-control

The implementation of the science and technology plan, the stage results are gratifying

Since 2016, the Ministry of Science and Technology of the People's Republic of China has supported 32 third-generation semiconductor and semiconductor lighting related R&D projects, including 7 projects in 2018, including “new energy vehicles”, “strategic advanced electronic materials” and “intelligers”. Three key specialties for grid technology and equipment (see Table 1). And the above special projects are combined with specific application requirements, providing full support for the third generation of semiconductor materials, device development and application。 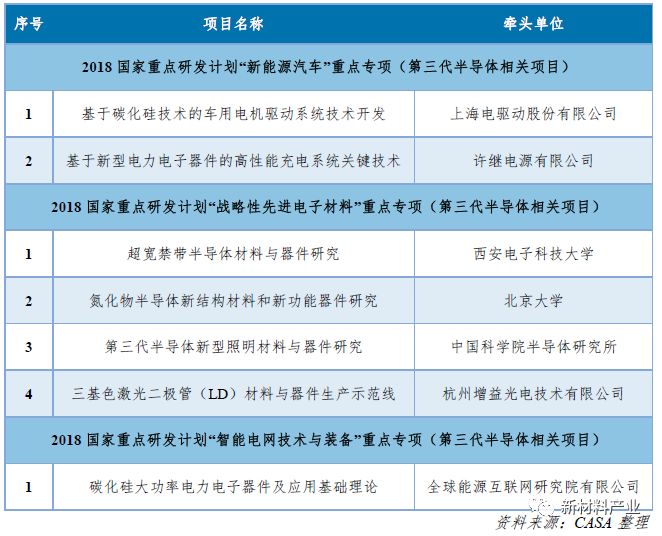 As of now, some of the pre-deployed projects have achieved phased R&D results. The details are as follows: a low-defect 6-inch N-type SiC single crystal substrate sample is prepared, the micro tube density is ≤ 1 / cm 2 , and the resistivity is ≤ 30 mΩ · cm, which has reached the requirement of "open box ready to use"; The crystal form control technology obtains a low-stress 4H-SiC crystal form, the resistivity is ≤ 30mΩ·cm, and the resistivity non-uniformity is less than 10%. The epitaxial growth of Si-based GaN materials and the development of devices have made important breakthroughs. By regulating stress and suppressing defects, non-cracked GaN materials are epitaxially grown on Si substrates. The crystal quality has reached the international leading level, and C impurities have been clarified for the first time in the world. In place of N-space in GaN, the world's first Si-substrate GaN-based laser was successfully developed, and continuous room-injection lasing at room temperature was realized. The normally-off GaN-based HEMT device was developed using p-GaN gate structure. + 2.0V and channel mobility of 1 500cm2 / (V · s), reaching the international advanced level. Achieved mass production of domestic RF chips, successfully developed 10W millimeter-wave GaN power MMIC, device efficiency exceeded 67%, broadband device efficiency exceeded 61.5%, linear gain 15d B; MTTF@225 °C, more than 1 million h, device reliability reached The international leading level; more than 40,000 domestic GaN devices have been used in more than 5,000 commercial base stations. Developed GaN-based high-efficiency yellow LED (electrical light conversion efficiency increased from 15% at the beginning of 2016 to the current 26.52%, 565n @ @20A / cm2), and based on this achievement, developed a five-primary LED light source with a color temperature of 2 941K. The index is as high as 97.5, and the efficiency is 121.3lm/W, which has reached a practical level。

Government policies at all levels are frequent, and precise support is strengthened

Since 2018, the central government and local governments have attached great importance to integrated circuits and third-generation semiconductors, and have introduced relevant industry development support policies. It can be seen from the introduction of the policy and the release time density that the country is vigorously developing the semiconductor industry, and the integrated circuit is the support focus of policies at all levels。 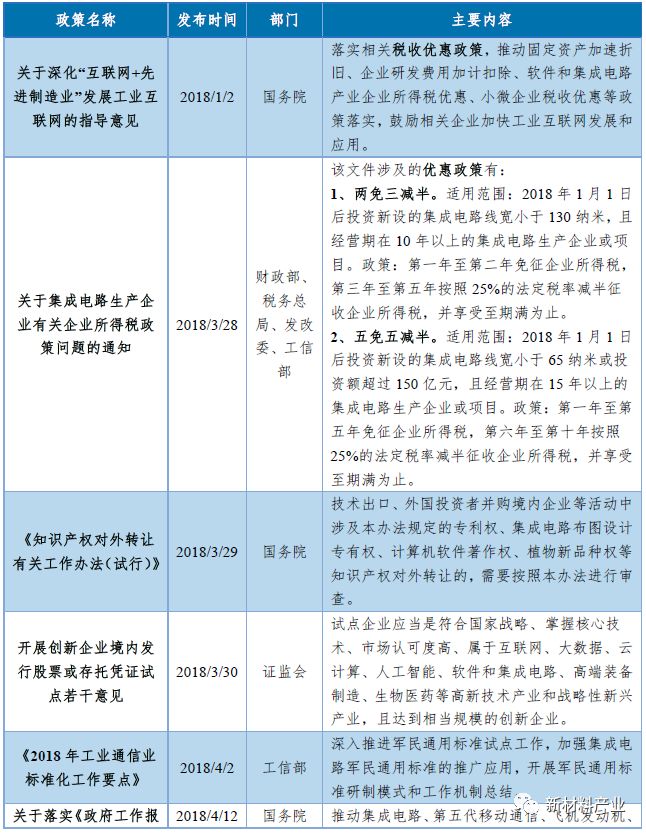 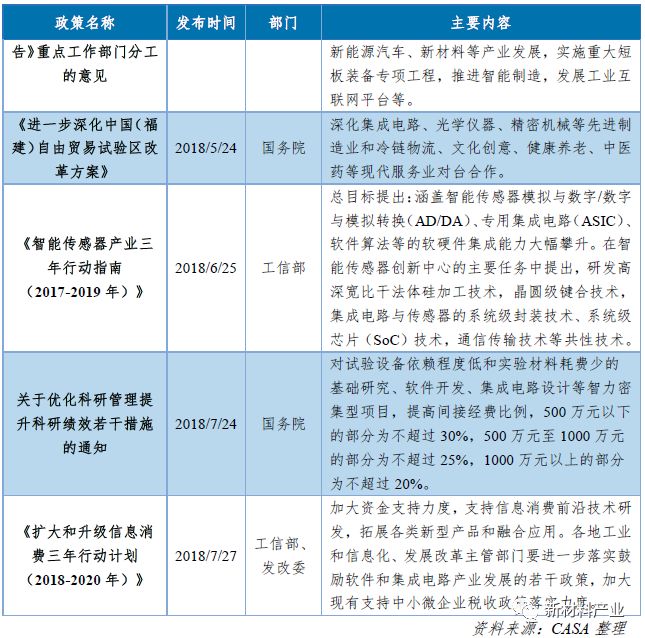 According to incomplete statistics, in 2018, more than 13 local governments including Beijing, Shanghai, and Shenzhen introduced industrial policies to support the development of semiconductors, especially the integrated circuit industry, in order to cultivate new momentum for economic growth and seize a new round of development in the semiconductor industry. Machine (see Table 3)。 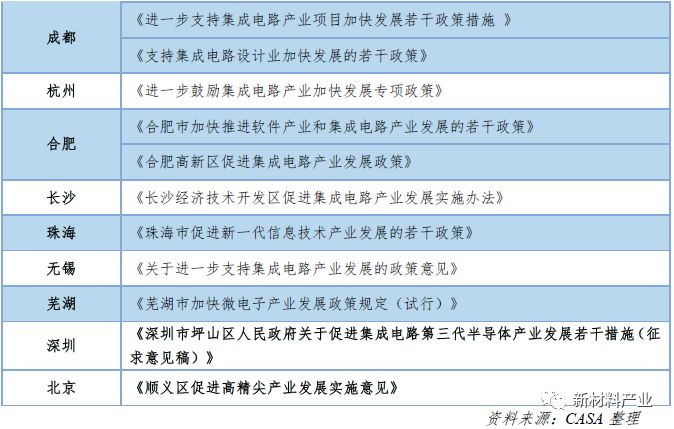 In order to carry out the "Guiding Opinions on Ten High-tech Industries in Beijing to Accelerate Scientific and Technological Innovation and Develop Next-Generation Information Technology", in November 2018, Beijing Shunyi District issued the "Shunyi District to promote the development of high-tech industries" (referred to as " "Implementation Opinions")), the "Implementation Opinions" covers 18 support policies in 5 major aspects, fully attracting high-end talents to enter the district, accelerating the transformation of scientific and technological achievements, and realizing the rapid and healthy development of high-tech industries including the 3rd generation semiconductors. . According to the news, the Zhongguancun National Independent Innovation Demonstration Zone Management Committee and the Beijing Shunyi District Government are jointly formulating policies to promote the development of advanced semiconductor industries such as the third generation. If the above documents are issued, the third generation semiconductor industry will be in Beijing. Shunyi realizes rapid agglomeration and provides strong conditions to guarantee。